Santorini bakery » The Magic of the Greek Islands – With Santorini the Icing on the Cake
The Greek Islands, “irresistible—magic to make the sanest man go mad.”
Homer, The Iliad

Homer was writing about the heat of love, but what passengers on a cruise have not felt that love, that magic, the first time they sailed into the caldera of Santorini in the island group of the Cyclades, and beheld the old city of Thira rising a thousand feet above them on the lip of the volcano? The magic would increase when they heard the story that, when this volcano blew in the 16th century before Christ, the tsunami that followed destroyed the Minoan civilization in Crete and this very city on the volcano island itself, Atlantis, now called Santorini.

Wow! What island needs a marketing or public relations consultant with a history or mythology like that? 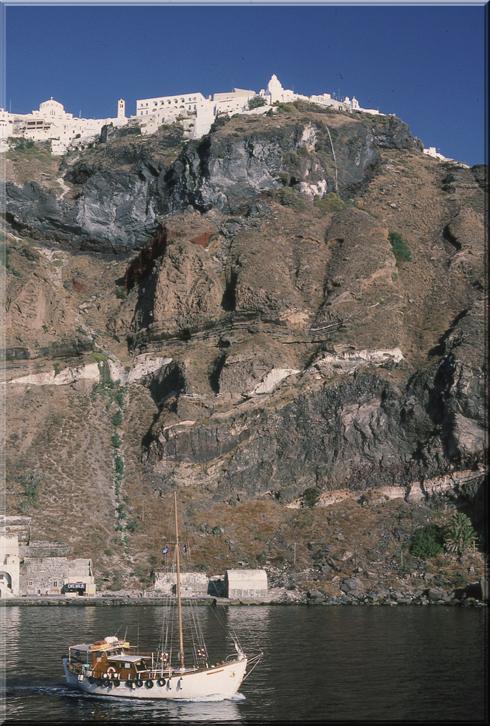 The caldera rim seems like the frosting on a wedding cake. Fishing boats dodge around the larger cruise ship.

Sailing serenely into Santorini is a mystical experience not unlike navigating into New York Harbor and, appropriately humbled, gazing upon the Statue of Liberty. There are, of course, other places in the world with signature landmarks that thrill visitors, Niagara Falls, for example, and Machu Picchu and the Eiffel Tower and maybe even London Bridge, but there’s a particular tranquility in reaching this Greek Treasure Island easily on a placid sea. You don’t arrive exhausted, bombarded with noise as you might if you are there to see the Pyramids.

Most people cruising Greece apparently say that of all the islands they visited, the one place they would want to return to for a second time would be Santorini. Indeed the most traveled of any group are inclined to respond that “See Naples and Die” is nonsense. Even if Naples didn’t have its crime and pickpocket offenses against tourists, it could never hold its own as a romantic destination in comparison to Santorini.

Let’s talk about cruising the Greek islands for a moment. It was complicated even before amateur politicians in charge of Greece really started to lose their way. The cruise lines have not had a proper grip on what the public really wants which is: cruise lines not building huge ships that would dominate any island visited and destroy the essence, the charm, the very identity of the island itself. This concern is not unique to Greece cruising. We see it in the Caribbean where ships too large for the Panama Canal are also essentially too large for the harbors of the Caribbean islands so the cruise lines with those gargantuan ships have constructed places to tie down, artificial islands, if you will, where shore excursions don’t bring cash to Mom and Pop island shops selling straw hats and native crafts but to retail stores owned by the cruise line. As is said, “Follow the money!”

It’s further complicated by the reality that Greek timetables are not in any way related to, say, super-efficient German ones like the train timetables at Deutsche Bahn. The ferries servicing the islands swing round them in loops rather than direct to each. The numbers of ferry passengers vary widely so boarding times are never a constant. Furthermore Greek is surely the language of the sea. For example, siga-siga means “slowly slowly,” exactly the right speed for a sailing vacation. There is even a word in Greek, methavrio. It means “the day after maňana!”

We know professional travel writers who choose to specialize in one destination. We have Durant Imboden (Europe for Visitors), Tom Brosnahan (Turkey), and we’ve heard of Matt Barrett (Greece Travel). Given the uncertain state of Greece tourism and the fact that the cruise line we sailed with in the Greek Islands is no longer in business, we think you might want to check out Barrett’s website. He seems to offer a lot of down-to-earth advice and is quite upfront about how he works. USA Today also had some advice on luxury cruises to the Greek Islands but its advice is five years old!

Unless you love the slow travel aspect of sailing you might need help to plan your route to get expeditiously from one island to another. What you want is a small ship cruise that leaves and returns to Piraeus. The major cruise lines, even classy Silversea, don’t offer a Greek island cruise. Its Mediterranean cruises suggest it believes most passengers would want to include Istanbul or Rome or other close by nations. Nothing wrong with that, except that it  deprives you of other Greek islands. On our cruise we did stop briefly at Mykonos but the beaches were dominated by nude Rubens-like German sunbathers and the streets by somewhat inebriated and bellicose tourists so our cruise passengers all pulled back to the ship. The Greek Islands, even remote Kos, suffer at times from special tourism offers that bring masses of young undisciplined German and British tourists enjoying both all-inclusive group travel and the liberal limits on alcohol consumption. 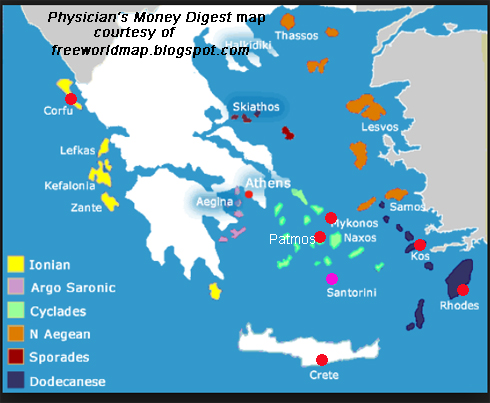 We have marked the island map with red dots for attractive islands and ports with Santorini colored purple to distinguish it. If you were going to limit your island cruise to islands in the south east of Athens you might look for a ship that cruised from Santorini to Crete then some in the Dodecanese such as Rhodes (we will talk about Kos later: so close to Turkey, it’s not a common island for most Greek lines). And then back into the Cyclades for, always interesting, Patmos, the island where John, supposedly, wrote the Book of Revelation. 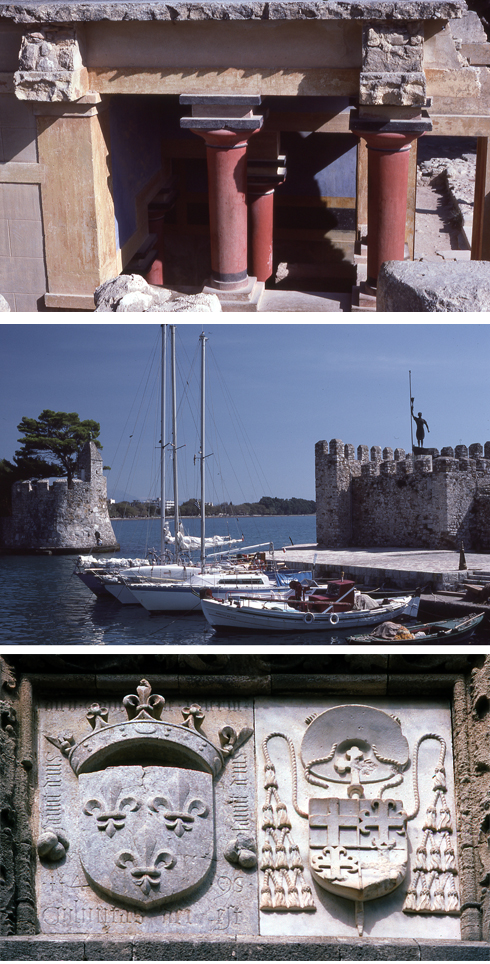 Crete leads you by way of its restored palace of Knossos to Rhodes the island that seems suspended between its classic history and Crusader past.
Source:http://www.hcplive.com/